One of the earliest events in development is the switch to self sufficiency. Soon after an egg is fertilized, the new individual must activate its genome and cease relying on maternally-provided RNA, a change known as the maternal-to-zygotic transition. Epigenetic reprogramming is central to this process; epigenetic marks, including DNA methylation and histone modifications, must be completely remodeled for the zygotic genome to begin expressing its own RNA. In her presentation at TAGC, Jadiel Wasson from the Katz lab at Emory University described what happens when some of that epigenetic machinery is missing.

Wasson studies a demethylase called KDM1A that removes the H3K4me2 epigenetic mark from histones; this mark is thought to be a “memory mark” that helps daughter cells know what genes to transcribe. She and her colleagues showed that KDM1A is expressed in oocytes and in early embryos. To determine its function in development, they deleted KDM1A in mouse oocytes, meaning it was missing when the zygote was fertilized; this was lethal. They performed crosses where the male had normal KDM1A, but the female lost KDM1A in the germline. Embryos from these crosses failed to undergo the maternal-to-zygotic transition and did not survive.

Wasson then deleted KDM1A in the female germline in a way that resulted in embryos with only a partial loss of KDM1A function. The majority of these mice died during embryogenesis, but a few survived to adulthood. These animals displayed extreme obsessive-compulsive tendencies as measured by a marble burying assay; in fact, they displayed more severe obsessive-compulsive behavior than an established mouse model of OCD (see Shmelkov 2010). This provides a striking case of altered epigenetic programming at fertilization that leads to a behavioral phenotype weeks later. 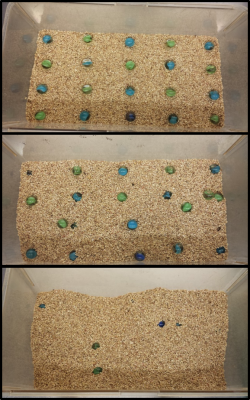