The sex of many reptile species is set by temperature. New research reported in the journal GENETICS identifies the first gene associated with temperature-dependent sex determination in any reptile. Variation at this gene in snapping turtles contributes to geographic differences in the way sex ratio is influenced by temperature. Understanding the genetics of sex determination could help predict how reptiles will evolve in response to climate change.

In crocodiles, alligators, and certain lizard and turtle species, an embryo can become either a male or a female depending on the temperatures it experiences while in the egg. Rapid climate change may threaten the future of some of these species by skewing the sex ratio. For example, by some estimates temperature rises over the next century will cause painted turtles to produce only females. Such species may also evolve in response to climate change. Biologists are trying to understand how these animals will be affected by and adapt to rising global temperatures.

But little is known about how this temperature-dependent switch between ovaries and testes is regulated. To look for clues to the molecular mechanisms behind this process, study leader Turk Rhen (University of North Dakota) and his colleagues investigate how genes influence sex determination in common snapping turtles. The advantage of focusing on this rugged-looking North American native is that sex is determined in a brief five-day window during the 65-day egg incubation: the temperature-sensitive period. If the incubation temperature during the temperature-sensitive period is changed from a “male-producing temperature” (26.5°C or 79.7°F) to a “female-producing temperature” (31°C or 87.8°F), all the eggs will hatch into females. 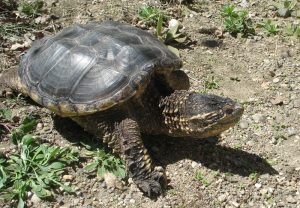 In previous work, the team identified a gene—CIRBP—that is activated within 24 hours of such a temperature shift. Two days later, several genes known to be involved in ovary or testes development are either activated or repressed. The new study confirmed that CIRBP is expressed at the right time (very early in the temperature-sensitive period) and the right place (the gonads) to be involved in specifying sex.

To test whether this hypothesis is correct, the researchers investigated DNA sequence variation at the CIRBP gene, and whether it influenced the chances of an individual turtle becoming male or female.

They found that some of the turtles carried a slightly different version of CIRBP: at a specific position in the sequence, an “A” in the four-base DNA code was substituted with a “C”.

This change rendered the gene unresponsive to temperature: instead of being induced by the female-producing temperature, the “C” version of the gene remained at steady levels.

Individuals carrying this unresponsive “C” version were more likely than average to be male. This single-letter DNA difference between turtles could explain around a quarter of the genetic variability in sex determination temperatures, which suggests that the activation of CIRBP is a crucial event in specifying sex.

Remarkably, this CIRBP variant may partly explain a curious fact about snapping turtles: the sex ratio in populations from different latitudes responds differently to temperature. For example, if you collect eggs from snapping turtles in Minnesota and Louisiana and incubate them all at 27°C (80.6°F) in the lab, the eggs collected in the North will produce nearly all males, while those from the South will produce mostly females. This variation suggests subpopulations of the species have evolved and adapted to their local climate.

The team found that the “C” version of CIRBP was more common in turtles from northern Minnesota than those from 250 miles away in southern Minnesota, and it was not detected in a population from even further south, in Texas. Though this is only a small sample of locations, the trend is consistent with the sex determination pattern in each population: the “A” version (which makes turtles more likely to be female) was more common in populations that produce females at a lower temperature.

The protein encoded by the CIRBP gene (cold-inducible RNA-binding protein) is likely involved in sensing temperature and converting it into a developmental signal to trigger the formation of either testes or ovaries, says Rhen. Studies from other organisms suggest that this protein can regulate temperature-dependent processes by binding to the RNA “messages” produced by specific genes.

“CIRBP seems to play a crucial role in sex determination,” says Rhen. “The striking part is that we see a consistent association across multiple levels of biology: the variation at the DNA level influences the gene’s activation (expression into RNA messages), which is in turn correlated with whether an individual turtle becomes male or female. That association with sex holds whether we look at individuals or families, and we even see differences at the population level.”

But CIRBP is not the only gene important for specifying sex in snapping turtles, the data show. “There is a common misconception that there must be a single “magic bullet” gene that determines sex in response to temperature,” says Rhen. “Our data suggests that multiple temperature sensors control sex by acting together. We’re trying to identify the other components of this system and to determine how they interact to influence sex. Better understanding variation at these genes may one day allow us to predict how reptile species will evolve under a new climate regime.”