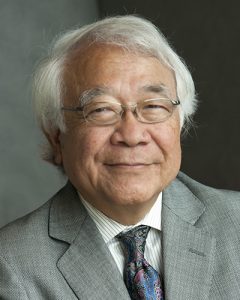 Keith Yamamoto is Vice Chancellor for Science Policy and Strategy and Director of Precision Medicine at UCSF. After earning a PhD at Princeton, he came to UCSF in 1973. He served as chair of the Department of Cellular and Molecular Pharmacology from 1994 to 2003 and as Vice Dean for Research in the School of Medicine from 2002 to 2015. Yamamoto has long been an international leader in studying the mechanisms of signaling and gene regulation by intracellular receptors; he closed his research laboratory in October of 2019.

Has the process of closing down your lab affected your research interests? What research are you most excited about right now, and why?

We’ve been pursuing a set of big research questions for 43 years in my lab. We’re writing seven papers right now, so the work still feels very current. I’m really excited that we have reached a new level of understanding about how cell and physiologic context drives differential gene expression networks; transcription patterns are precise in a given context yet highly plastic from context to context. Gaining a foothold on how cells and organisms solve this paradox provides insight into many interesting biological processes and biomedical concerns.

What did you like about working with C. elegans?

Unparalleled genetic accessibility for a metazoan. It has a small, compact genome, and it’s a self-fertilizing hermaphrodite. These characteristics open up questions—and approaches to answering them—at an entirely different level.

As a grad student working with mammalian cells and tissues, I was nevertheless very tuned in to bacteriophage lambda genetics. I felt that phage lambda was the most “intellectually elegant” biological system because it seemed that a brilliant lambda geneticist could, in the morning, dream up a beautiful experiment to address a consequential research question, plate out bacteria and phage in the afternoon, and the next morning, check out the plates and have an answer! Okay, it wasn’t exactly that simple, but you get the idea. And among metazoans, C. elegans has a similar elegance; it’s experimentally approachable in ways that are intellectually pleasing and potentially rewarding. It’s a sort of “grown up” lambda phage.

For the past 15 years, we’ve toggled back and forth between mammalian and C. elegans work in the lab. What we’ve learned in worms has almost always informed our mammalian studies.

I have two examples.

First: as an undergraduate freshman, I declared a major in biochemistry, but I didn’t start working in the lab until my sophomore year. Before that, I called my dad, who was very happy about me training in science. I told him I was having fun in a creative writing course and was thinking of transferring to become an English major.

I thought science was interesting, but it seemed like a totally isolated endeavor. I was imagining being trained and then going off by myself to the corner of a dark laboratory, staring into a microscope and never talking to anybody again. I thought, “I’m really a social person; I want to be able to interact with people, so that must mean that science is not for me.” Well, my dad talked me off that ledge, and once I started working in the lab, I learned that science is an enormously social endeavor—that doing science well, and enjoying it, depends strongly on interacting effectively with others.

The second example came at the beginning of graduate school. I’d migrated from a large midwestern state university to Princeton, where many of my classmates were from high-powered programs in the Ivy league and elsewhere. I felt totally out of it—I thought that I’d never overcome the big headstart that they appeared to have. In fact, of course, learning factual scientific information from well-known scientists is great, but it’s a pretty small part of becoming a successful scientist. More significant are learning to recognize important problems, breaking them into experiment-sized pieces, and deciding which results to pursue. Those are the skills you acquire in the actual doing of science, and good mentoring in graduate school—which I got from Bruce Alberts—is critical for building and using those skills. I think it’s not so uncommon for people from non-traditional backgrounds to perceive barriers to their success in science. But catching up is not hard to do if you work hard, and diversity of background and experience enriches scientific thinking and doing.

I’ll give you two. One was with the late Ira Herskowitz, who was a dear friend and someone I recruited to UCSF. As a graduate student, Ira was a terrific lambda geneticist, and he later became a 24/7 proponent for yeast genetics. I was deeply jealous of the level of genetic access and ease of experimentation in yeast compared to the cell culture work that I was doing. As soon as we cloned the mammalian glucocorticoid receptor, I begged Ira to teach us how to put it into yeast to see if it would function—he did, and it did! So we proceeded to do yeast genetics on a mammalian protein. Our collaboration revealed the functional interaction of the glucocorticoid receptor with the Swi/Snf chromatin remodeling complex. This was the first hint that metazoan transcriptional regulators acquire their activities by physical association with coregulatory factors, which was later confirmed with mammalian chromatin remodelers.

A second important collaboration was with the late Paul Sigler, who was a marvelous crystallographer. At a symposium at the University of Wisconsin in 1988 or ‘89, Paul and I were sitting on the Terrace, drinking beer, and talking about what needed to be done to better understand how transcriptional regulatory factors were working. That conversation launched a joint effort in which we solved the structure of the DNA binding domain of the glucocorticoid receptor in complex with its sequence-specific DNA motif. That started us on a long, exciting, and rewarding series of molecular structure-function studies.

Collaborations are fun because you establish close interactions with new people, and they’re exciting because you expand the range of concepts and technologies that you can apply to your problems of interest.

Selected Publications from the Yamamoto Lab