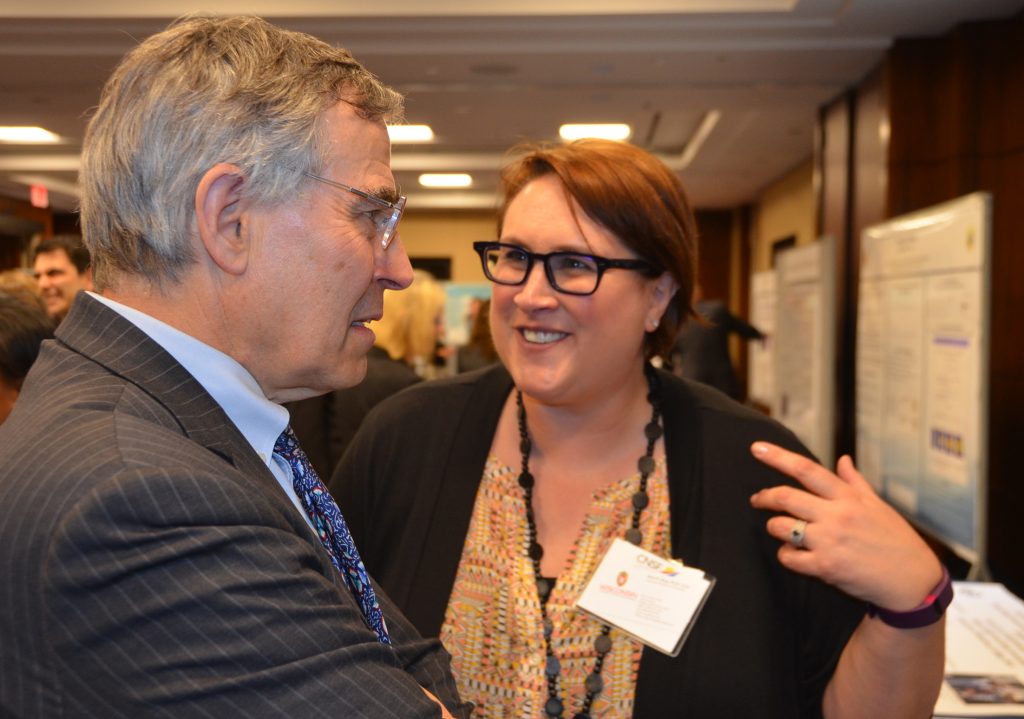 Ahna Skop explains why she uses C. elegans to study cell division to Rush Holt, current CEO of AAAS and a former Congressman from New Jersey.

Last night, a milieu of scientists, Congressional staffers, members of Congress, and representatives from the National Science Foundation (NSF) filled the banquet room of the Rayburn House Office Building to show how investments in STEM research and education are fueling American innovation. Among those scientists was GSA member Ahna Skop, an Associate Professor of Genetics and Life Sciences Communication at the University of Wisconsin–Madison.

Skop arrived to the poster session after having spent the day on Capitol Hill sharing her enthusiasm for conducting model organism research in C. elegans, understanding cell division, increasing diversity in science, and using the beauty of microscopy to engage the public in her research on cell division. 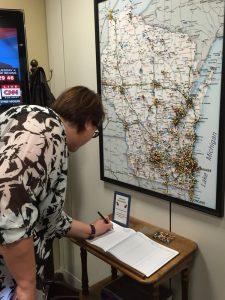 “It’s essential that NSF remain a major part of the funding discussion for researchers who are also passionate about teaching and outreach,” she told a staffer in Rep. Mark Pocan’s (D-WI-02) office. “NSF has a mandate for education that Congress must support.”  Skop also met with the offices of Sen. Tammy Baldwin (D-WI), who recently sponsored the Next Generation Researchers Act, and Sen. Ron Johnson (R-WI), a fiscal conservative who has a growing interest in the life sciences. Policymakers were fascinated with Skop’s microscopy images of mitosis, which she used as a reminder that support for fundamental research enabled the development of visualization tools like green fluorescent protein.

The poster session was organized by the Coalition for National Science Funding (CNSF), a consortium of 140 organizations united by a concern for the future vitality of the national science, mathematics and engineering enterprise. GSA, a member of CNSF, works in concert with these organizations to increase the national investment in the fundamental research and education initiatives supported by the National Science Foundation. Among the senior officials and Members of Congress visiting the 40 posters representing NSF investments across the country were NSF Director France Córdova, former Congressman and CEO of AAAS Rush Holt, and Rep. Jerry McNerney (D-CA-09). 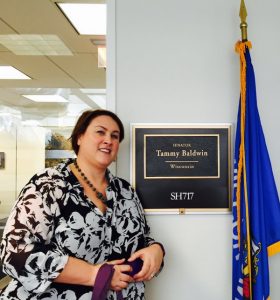 Dr. Skop on her way in to Senator Tammy Baldwin’s office

The push to improve awareness of NSF’s contributions and increase its funding is critical as the agency’s budget has remained relatively flat in the past few years. The President’s budget request for fiscal year (FY) 2017 asks for $7.964 billion for NSF, of which $400 million is mandatory funding that Congress is unlikely to accept. This was demonstrated earlier this month when the Senate Appropriations Committee approved the Commerce, Justice, Science spending bill which allotted $7.51 billion to NSF, ignoring the mandatory funding proposal and leaving the agency with a meager $46 million increase over FY 2016.

Feeling the impact of repeatedly low budget increases, the Biological Sciences Directorate (BIO) at NSF placed the Collections in Support of Biological Sciences and Instrument Development for Biological Research programs on hiatus for fiscal year 2017, pending the results of an evaluation to assess their “impact and scalability.” Notably, this decision was rooted in the need to prioritize other initiatives in the BIO budget, suggesting that an infusion of funding could allow support for emerging programs without impacting existing ones. During her visits with policymakers, Skop mentioned these programs explicitly, citing the C. elegans stock centers as an invaluable resource for her research that Congress should be proud to support.

You can share your  voice in support of the National Science Foundation too.  Write your members of Congress today to tell them why NSF funding is important for your research.

To learn more about the CNSF exhibition, visit www.cnsf.org and #SeeNSF on twitter.