With genomic data from hundreds of thousands of people accumulating, geneticists are now able to mine these data for very rare, but very informative genetic variants, including loss-of-function alleles. For example, across the enormous “reference set” of human exomes announced at the 2014 American Society for Human Genetics Meeting, on average there’s a variant every six bases. In the first of our reports from the ASHG meeting, Exome Aggregation Consortium (ExAC) lead analyst Monkol Lek (Massachusetts General Hospital/Broad Institute), has written a practical guide for geneticists looking to explore their-favorite-genes in the publicly-available exome data. Thanks to Monkol and Daniel MacArthur! If you’d like to write a guest post for Genes to Genomes, contact editor Cristy Gelling: cgelling@thegsajournals.org

We live in an amazing time to do human genetics. Over the last five years, thanks to impressive advances in DNA sequencing technology, the research community has collected sequencing data on genetic variation from over 200,000 samples. This provides us, for the first time, with the ability to study genetic variants at very low frequencies in the general population. However, in order to perform this research it’s critical that these genetic data be brought together and analyzed in the same way to ensure that the genetic changes that we find are real, and not the artifacts of differences in sequencing technology or analytical pipelines.

This goal is what drives the Exome Aggregation Consortium (ExAC), an international coalition of investigators with a focus on data from exome sequencing — an approach that allows us to focus variant discovery on the regions of the genome that encode proteins, known collectively as the exome. To date the Consortium has accumulated and jointly analyzed exome data from nearly 92,000 individuals, and has prepared a publicly accessible data set spanning 61,486 of these individuals for use as a global “reference set”. While the individuals in the reference set aren’t necessarily healthy — many have adult-onset diseases such as type 2 diabetes and schizophrenia — we have removed individuals with severe pediatric diseases, making this (we believe) a reasonable comparison data set for childhood-onset Mendelian diseases.

On October 20th at the American Society of Human Genetics (ASHG) conference we announced release 0.1 of the ExAC data set in two forms, as a browser and a downloadable raw data file. This was not just a massive data release but also a massive collaborative effort, which is detailed here. Four weeks after the release, the ExAC browser has received over 120,000 page views from over 17,000 unique users, and the raw data has been downloaded by over 150 organizations. The annotation tools ANNOVAR and ATAV have provided updates that have incorporated the ExAC data and the developers of Combined Annotation Dependent Depletion (CADD) have provided corresponding CADD scores. The commercial tools from GoldenHelix and GeneTalk have also incorporated the ExAC data. As the lead analyst on the project for over 2 years, I’ve been thrilled with the response it has received and the kind words and valuable feedback from the research community.

This practical guide, which uses two example genes FBN1 and MECP2 is aimed at general users and how they can access information using the ExAC Browser.

John Belmont commented on Nature News and Twitter that, within the ExAC dataset, the FBN1 gene associated with Marfan syndrome has 11 subjects with Loss of function (LoF) mutations. If these are true disease-causing variants then it fits roughly with the 1 in 5000 incidence of this disease.

The FBN1 LoF variants can be directly viewed on the ExAC browser by searching FBN1 or clicking on this link and then clicking on the LoF button. Things to note on the FBN1 gene summary page:

Amongst the 10 Loss of Function variants in FBN1

One of the upcoming features we are developing for the ExAC browser is the ability to view the sequencing reads from the reconstructed BAMs produced by the Genome Analysis Toolkit (GATK) Haplotype Caller using the –bamOutput option. For the splice acceptor variant 15-48760301-T-C, this is particularly useful to not only show the reads/bases supporting the SNP calls but also the reference sequence context and whether the acceptor site is canonical (i.e. ends in [T/C]AG).

Note: FBN1 is on the reverse strand

Loss of Function and ClinVar variants

Variants of the X-linked gene MECP2 can cause the neurodevelopmental disorder Rett syndrome, which affects mainly females. MECP2 LoF variants can be viewed by either following this link or searching MECP2 then clicking on the LoF button. In MECP2 there are 6 LoF variants. The stop-gained variant X-153296689-G-A has an allele count of 68, with 20 homozygous individuals. Currently the ExAC data set is not sex aware and does not differentiate between hemizygous males and homozygous females. An upcoming feature is to calculate these numbers correctly for variants on the X chromosome. The sex of each individual in ExAC was determined by heterozygosity on the X chromosome and normalized chromosome Y coverage.

Differentiating males and females from exome sequencing data, using chrX heterozygosity (X axis) and coverage on the Y chromosome (Y axis). Males form a cluster on the left, females on the bottom right. A small number of unassigned individuals are also visible, some of whom are probable Klinefelter cases. 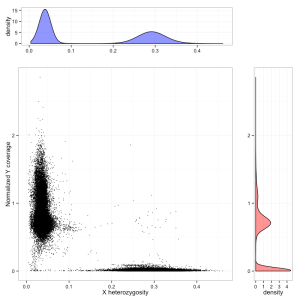 Now for the stop-gained variant of interest, all 20 of the homozygous individuals are actually hemizygous males. Similar to the FBN1 example, the stop-gained annotation only affects 1/3 transcripts while the other two (including the canonical) have a missense (p.Thr197Met, p.Thr209Met) annotation. According to ClinVar, this variant is a missense variant and classified as benign. The LoF variants X-153296104-TCAGG-T and X-153296112-AGGTGGGG-A with homozygous individuals are also due to hemizygous males.

The variant X-153295997-C-T is an example of a pathogenic ClinVar variant in MECP2 that is claimed to be associated with neonatal severe encephalopathy in males. The 4 homozygous individuals in ExAC are actually 4 hemizygous males. It was later argued to be a rare variant rather than pathogenic but still remains classed as pathogenic in ClinVar!

Finally for a pathogenic variant in ClinVar not found on the ExAC browser, with genomic coordinates X-153296806. The coverage data also provided for download shows that this site has adequate coverage for variants to be detected.

Fraction of samples at various coverage.

Another advantage of having the ability to view sequencing reads is that users can now look at the reliability of the more difficult indels and other complex variant calls. The Exome Variant Server (EVS) is a fantastic resource for the research community but did not have features for researchers to scrutinize indel variant calls. This was particularly concerning for researchers when publishing on novel disease genes. In the case of a recently published paper on LMOD3, for instance, the presence of homozygous frameshift indels in EVS greatly concerned our collaborators; it was only through careful scrutiny of the raw data for these variants that we were able to reassure them that these were genotyping errors.

Firstly, let’s take a look at the 28 bp deletion X-153296090-CGGAGCTCTCGGGCTCAGGTGGAGGTGGG-C in MECP2 which results in a frameshift variant. 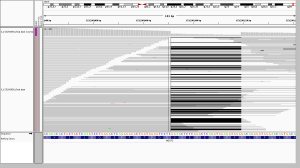 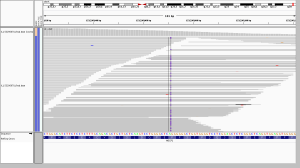 Both of these frameshift mutations appear real and may cause intellectual disability, so why do they exist in a data set of individuals without severe diseases? I propose three possible reasons:

Investigating which of these possibilities may be contributing will require further detailed analysis. We welcome comments from MECP2 researchers regarding the LoF mutations in ExAC.

Ending on an interesting point resulting from larger and larger data sets. The assumption that common variants remain bi-allelic is no longer valid, as with each new individual added there is a possibility of finding a new allele at a site where a bi-allelic variant is present. For example, the variant site rs2063690 is now a quad-allelic SNP – in other words, every possible base is present at this site in at least one individual in our data set! Furthermore, the figures below show three individuals who are heterozygous for the reference and each of the alternate alleles, while the last individual is heterozygous for two alternate alleles. 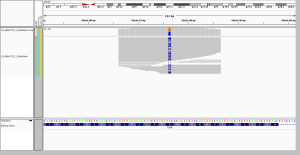 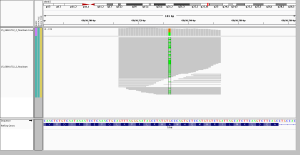 There is increasing urgency for the development of tools that deal appropriately with these multiallelic sites — approximately 7% of ExAC sites are now multi-allelic, and that fraction will grow as our sample size increases. That high rate of multiallelism shouldn’t be surprising, by the way; the ExAC dataset now (staggeringly) contains one variant every six bases on average, so it’s not a shock to see many cases where variant locations overlap.

We’ve been gratified to see the rapid and positive response of the community to the ExAC data set. We still have plenty of work to do, though – and we’d love to get your feedback. If you have issues with the data set or the website, please drop us an email. For website bugs or feature requests you can also lodge a Github issue.

Many thanks to Daniel MacArthur for comments/feedback, writing introduction and final thoughts!