In the early 1940s, many biologists doubted bacteria had genes. After all, they seemed to play by their own genetic rules: they appeared to lack chromosomes, meiosis, mitosis, sex, and all the other trappings of Mendelian inheritance. They even seemed to show a kind of Lamarckian inheritance, in which an individual could pass on traits acquired during its lifetime.

Then, in 1943, Salvador Luria and Max Delbrück published an article in GENETICS that marked the birth of bacterial genetics, revealing that this apparently Lamarckian inheritance was in fact a case of random mutation. Luria and Delbrück’s work wasn’t just a boon for bacterial genetics. Brought together by biophysics and war, the duo’s brief decade of collaboration also fostered the emergence of molecular biology by developing the viruses that infect bacteria into a streamlined genetic model.

In the February issue of GENETICS, Andrew Murray introduces the 1943 paper as one of the journal’s 100th anniversary Classics.

The roots of Luria and Delbrück’s partnership traced back to a paper published just as war was brewing in Europe in 1935. Luria was in Italy, a newly qualified doctor who was bored with medicine; Delbrück was in Germany, a young physicist who had grown bored with physics. Delbrück had collaborated with some biologists from a discussion group—his “little club”— contributing a quantum mechanical model of the gene to a paper on mutations and gene structure. Luria read the paper a few years later when he was in Rome completing a specialty in radiology and dabbling in physics under soon-to-be-Nobel-Prize-winner Enrico Fermi’s wing. Luria’s imagination was sparked by the paper’s proposal that the abstract concept of a gene, which was then still hazy with mystery, could be investigated as a concrete “collection of atoms.” It seemed, he would later say, “to open the way to the Holy Grail of biophysics.”

Luria wondered how to test the new ideas and stumbled on a possibility. He met a microbiologist on a stalled trolley car who turned out to be measuring bacteria in the Tiber River using bacteriophages—viruses that infect bacteria. Luria became intrigued by the possibilities of probing gene structure using the phage as a stripped-back biological system. 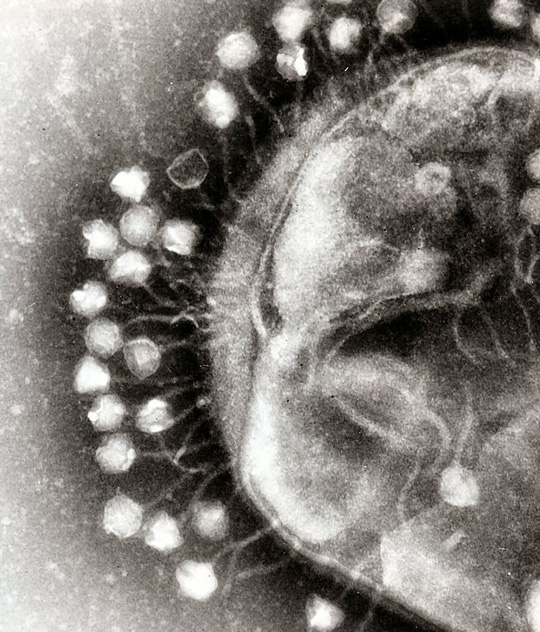 Bacteriophages (white polygonal shapes) attached to a bacterial cell, ready to transfer their genome into the bacterium. By Dr Graham Beards [CC BY-SA 3.0] via Wikimedia Commons.

Meanwhile, Delbrück had left Germany because his open dislike of the Nazi regime was blocking his chances of gaining an academic appointment. His back-up plan was to learn cutting-edge genetics methods at Thomas Hunt Morgan’s pioneering fruit fly lab at Caltech. But the physicist had a rough time acclimatizing to the specialized language of the “Fly Room.”

“I didn’t make much progress in reading these forbidding-looking papers; every genotype was about a mile long, terrible, and I just didn’t get any grasp of it.”

Then he began talking to Emory Ellis, a postdoc in the department at Caltech who had isolated some bacteriophage from Los Angeles sewage; Delbrück realized that he had found the system he had been searching for:

“I was absolutely overwhelmed that there were such very simple procedures with which you could visualize individual virus particles; […] This seemed to me just beyond my wildest dreams of doing simple experiments on something like atoms in biology.”

Back in Italy, Luria was encouraged to hear of Delbrück’s phage epiphany and, in 1938, hoped to use a government fellowship to travel to the US to work with the displaced physicist. But just as soon as he was awarded the money, Italian dictator Benito Mussolini announced a series of Nazi-influenced race laws. Luria’s fellowship was unceremoniously withdrawn because he was Jewish. With no funding to work with Delbrück, he sought shelter and grant money at Marie Curie’s Radium Institute in Paris, where he bombarded bacteriophage with radiation to study their molecular make up.

Then, on June 13, 1940, as the German Army advanced on Paris, Luria and his friends were forced to flee the city on bicycles. After making his way nearly 500 miles to Marseilles and the US embassy (via a combination of bike and freight train), Luria took a ship to New York. Once the US, he quickly obtained funding to restart his investigations and at a conference in December, he finally met the one other person in the world who thought phage was the key to understanding the gene: Delbrück. They immediately agreed to join forces. 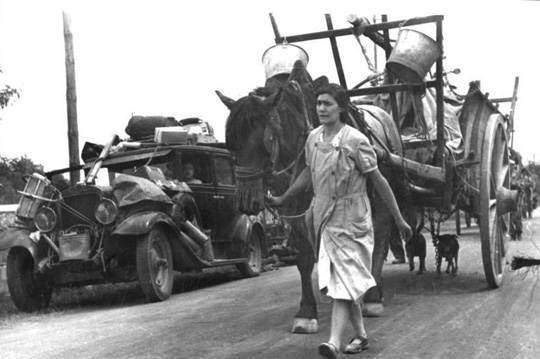 Among the first problems the pair tackled was the emergence of resistance in bacteria. When a culture is grown from a single cell and then exposed to phage, the infected cells die. But if left for a few hours or days, virus-resistant cells start growing and the culture revives itself. Many biologists held the view that these survivors were the descendants of cells that had developed resistance to the phage as a result of some direct interaction between the virus and bacteria.

But others saw no reason to believe that bacteria operated under entirely new rules of heredity. Just as for plants and animals, they argued that resistance mutations arise at random, and the virus acts as selective force that enriches the population for pre-existing cells that happen to be resistant.

At first, Luria and Delbrück struggled to come up with experiments to put this disagreement to rest. Luria tried measuring the proportion of virus resistant cells in growing bacterial cultures, but he seemed to get different results every day. Then, he had a chance encounter with a colleague at a slot machine:

“Not a gambler myself, I was teasing him about his inevitable losses, when he suddenly hit a jackpot, about three dollars in dimes, gave me a dirty look, and walked away. Right then I began giving some thought to the actual numerology of slot machines; in so doing it dawned on me that slot machines and bacterial mutations have something to teach each other.”

Luria realized he could distinguish between the acquired resistance and the random mutation hypothesis using statistics. If resistance were caused by exposure to the virus, it should arise only after the virus was added, at a relatively consistent proportion. But if resistance emerged by mutation at random times, then the proportion of resistant cells would be much more variable, depending on how early the mutation arose. Delbrück calculated the statistical distribution they would expect from random mutations and, to their joy, Luria’s experimental data matched it. They had shown that bacteria had genes that mutate at random, providing fodder for natural selection. Their approach also provided a quantitative approach for studying bacterial mutation rates. 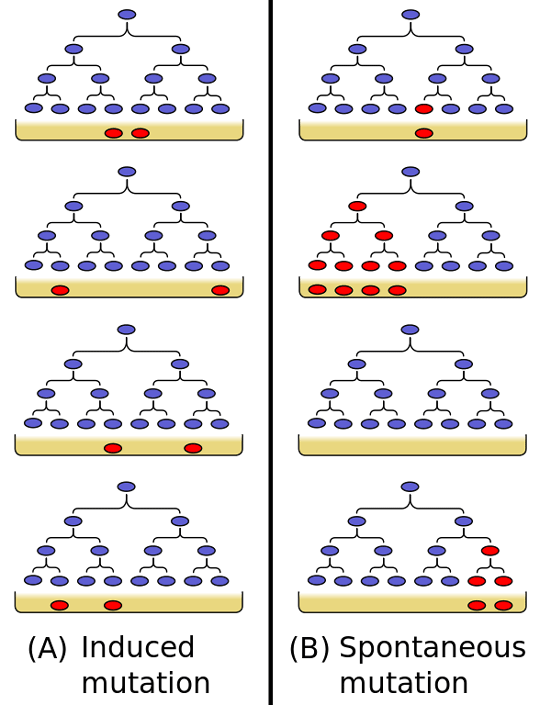 The Luria–Delbrück experiment. (A) If resistance is induced by the presence of the phage in the final, assay plate, independent cultures should yield roughly similar numbers of resistant colonies. (B) If resistance mutations arise spontaneously during the cell divisions prior to plating, the number of resistant colonies will depend on how early in the culture the mutation arose. Image: Madprime via Wikimedia commons

As the war lurched on, and finally ended, Luria and Delbrück firmly established phage as the powerhouse of molecular biology. They founded an informal but close-knit community later known as the American Phage Group that was steeped in the quantitative methods and analytical elegance the pair favored. The group worked with standardized methods almost from the start; most members of the group first learned to work with phage at the summer courses established by Delbrück (that continue today at Cold Spring Harbor Laboratory). Delbrück also negotiated a “phage treaty” in 1944 that committed most of the main players to using a single shared series of phage lines. Prominent members of the group included James Watson (Luria’s first grad student, who would later help discover the structure of DNA), Alfred Hershey and Martha Chase, who showed that the hereditary material in phage was DNA (Hershey would later share a Nobel prize with Luria and Delbrück), Matthew Meselson and Franklin Stahl, who used phage to demonstrate that DNA replicates one strand at a time (semi-conservative replication), and Sydney Brenner, who collaborated on the phage experiments that revealed how DNA bases encode proteins (the triplet genetic code).

The fruit of this community-building was a transformative molecular understanding of heredity within a remarkably short period. Luria and Delbrück’s phage epiphanies turned out to be science jackpots.