Did you know they rewrote the game?

If you’re a young geneticist who spends most of your life hanging around universities—as I still do—you’ll likely notice in your department the presence of some old people. People in their 80’s and 90’s. Often, these are scientists who made incredible discoveries decades before you were born, but you may not know a thing about their accomplishments. My advice to you before you find you’re moving on to another locale: invite one of these folks for a cup of coffee and treat yourself to a wonderful conversation. You may even find yourself relaxing a bit as you learn that science—as well as the larger world in which it exists—has always gone through periods of uncertainty and upheaval.

That those new to a field don’t know the history of their field is unsurprising and not necessarily a bad thing. It’s far more interesting to push the scientific frontiers of today than to spend time learning how challenges of long ago were overcome. But there is a lot of value in taking a few minutes to meet some of the codgers who confronted those challenges in their youth. 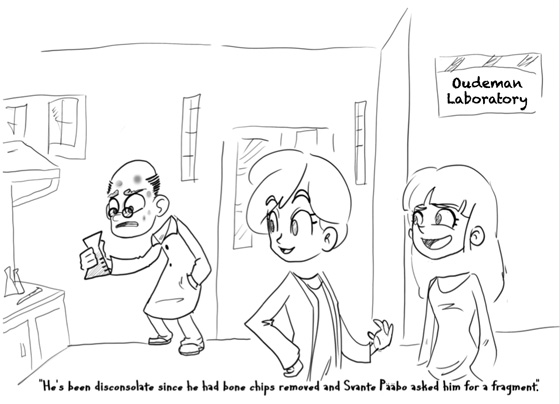 I first noticed old scientists when I was a graduate student in Cambridge, England in the 1970s. At that time, Lord Adrian (then 87), an electrophysiologist who won a Nobel Prize in 1932, could be seen walking across the lawns at Trinity College. At seminars in the Cambridge University Department of Biochemistry, where I did a course for the final undergraduate year called Part II, several old men with thick glasses sat in the front row; although it had been a long time since they were active experimenters, these men had discovered some of the fundamental reactions of biochemistry. But I never talked to Lord Adrian or any of the other senior biochemists.

As a young faculty member at Stony Brook in the late 1980s, I occasionally would see 1983 Nobel Prizewinner Barbara McClintock (then in her mid-80s) at Cold Spring Harbor Laboratory. Given the scarcity of women leading laboratories in the 1930s and 1940s, McClintock was a rare example of an old scientist who was a woman. But I never got to know Barbara McClintock.

Now that I’m starting to get up there in years myself, I’m in an enviable position. I have no inhibition about talking to our most senior faculty at the University of Washington, because these are people with whom I’ve been colleagues for a couple decades plus. Let me introduce you to a few.

Stan Gartler, 93, in Medical Genetics and Genome Sciences, used the phenomenon of X chromosome inactivation to show, in the mid 1960s, that tumor cells are clonal, arising from a single cell; Stan won the McKusick Award this year from the American Society of Human Genetics. George Martin, 89, in Pathology, looks a whole lot younger, maybe not unusual for someone who undertook some of the first genetic approaches to the study of aging. George just received a 5-year grant from the NIH and hopes to be still funded at 100. And Eddy Fischer, 96, in Biochemistry, with his colleague and co-winner of a 1992 Nobel Prize, Ed Krebs, discovered reversible protein phosphorylation in studies begun in the mid 1950s. I’m delighted to say that I’ve recently had enjoyable conversations with each of them.

If you’re hoping to find out the latest methodological wrinkle in Somekinda-seq, don’t start out with your local octogenarians and nonagenarians. But if you want to learn a little about how to find a tough problem to solve, or how to work with collaborators who push you in different directions, or how to combine methods from diverse fields, or how to persevere through difficult failures—these senior scientists are priceless sources of information. Some of them can tell you the history of scientific events that changed the way biological research is done. Others can describe the early stages of a method or apparatus or concept that will give you hope when you tackle the odds in coming up with one of these today.

Old members of our community have also seen the country and the world go through smooth times and rocky times, only to emerge again united in purpose; take advantage of their wisdom. And don’t underestimate the ability of older generations to learn new science. They will appreciate hearing from you what has come of the fields they set in motion long ago.

So get over your trepidation of approaching someone whose birthday cake might illuminate a stadium for Monday night football. Engage them in a conversation. Please let me know if you’re happy with the outcome.