I’m just back from a week-long vacation in magnificent southeast Alaska, nestled up against British Columbia. Off remote Chichagof Island, humpback whales surrounded us, so close we rafted our kayaks and thumped on them. In the Inian Islands, we spotted bald eagles perched amidst the tall Sitka spruces, their heads visible like golf balls in the rough. We sampled the salty taste of beach asparagus and heard the onomatopoetic call of the kittiwake. We woke from mid-sleep to view the Aurora Borealis. And in Glacier Bay National Park, we saw the ever-moving Margerie, Johns Hopkins, and Grand Pacific Glaciers, moving me to wonder if I would ever see them again: NASA scientists report 15 of the warmest 16 years on record since 2001.

Alaska calls to mind geology more than genetics, but the effects of a warming earth respect no professional boundaries. According to the EPA, in 2014 the U.S. poured 6,870 million metric tons of carbon dioxide into the atmosphere, second only to China. Average carbon dioxide in the atmosphere has exceeded 400 parts per million, a level not seen in at least 800,000 years.

Yet on the political front that would deal with climate change, Americans have elected a Congress that refuses to take serious action to protect the environment—a Congress in which some members deny both scientific evidence and everyday evidence present right before their eyes, like seawater seeping up in south Florida. Those Americans who doubt that the earth is warming have ample opportunity to find kindred spirits and elect a new president and re-elect Senators and Representatives who share their views. 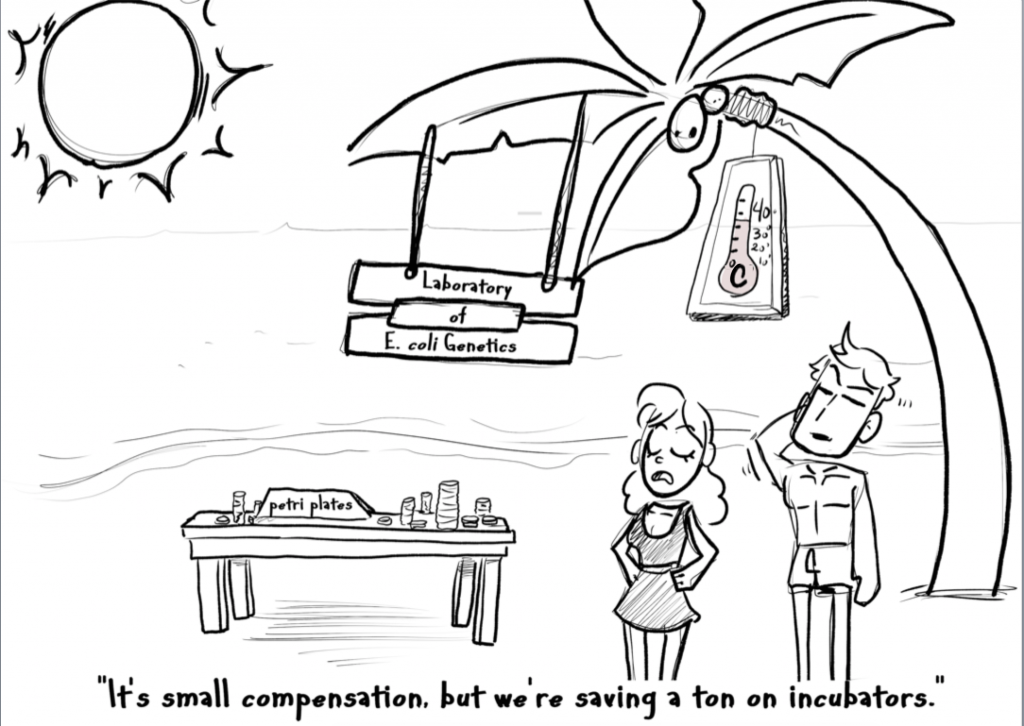 Beyond climate change, our world has lots of other problems, from racial tensions to refugees streaming out of war zones to vast disparities in access to food, healthcare and education. Not to mention pollution, homelessness, nuclear waste, and the deterioration of power grids, roads, bridges and other infrastructure.

What is our responsibility as geneticists to take up challenges beyond the laboratory in efforts to help solve huge problems?

The answer, I believe, is that all scientists have a major responsibility. We are among the best-educated citizens anywhere, with much of that education occurring in public universities established to improve the world. We have chosen careers with high-minded aspirations to find solutions to complex biological mysteries. Many of us feel that our research—even on the simplest of creatures—ultimately helps to alleviate suffering, albeit more typically of patients and not the planet. We have a deep-seated conviction in the power of rational thinking to take on seemingly intractable issues. And we include some of the most idealistic and creative young people I’ve ever met.

As geneticists, our primary job is to decipher how genes, cells and organisms function. Although demanding, competitive, incremental in all but the rarest of instances, and almost never securely funded beyond the next few years—our work can at times be intense, exhilarating and intoxicating. It also has a tendency to swallow us whole, consuming all our waking hours and permeating our dreams. We are certainly busy with our science.

But at the risk of sounding like your university’s commencement speaker, each time you leave the walls of your perhaps not-so-ivy-covered lab bench, I urge you to try to contribute to something even bigger than your science. Give whatever you have of your overloaded time, your overworked energy and your overburdened enthusiasm to causes that try to make a small dent in some difficulty that bedevils your local or global community. Work to get people elected who share your hopes and values, and insist on scientific data and reputable sources of information when confronted with half-truths or outright lies. Use your social networks to find common cause with like-minded individuals. Start up your own groups to take action on problems that no one is yet tackling.

Our Alaskan trip was a family vacation, and you can’t help but wonder what kind of future we older folks are bequeathing to our children. Solutions to a growing stable of challenges are out there, but it may be up to the next generation—to many of you—to ensure that these solutions don’t arrive too late to make a difference. I’d love to see some geneticists leading the charge.