Behind the Podium: Pamela Ronald

In preparation for The Allied Genetics Conference (TAGC), set to take place in Orlando this July, Genes to Genomes is getting the inside scoop from many of the outstanding keynote speakers in our “Behind the Podium” series. Here, GSA member Tiffany Timbers interviews Prof. Pamela Ronald, a professor in the Genome Center and the Department of Plant Pathology, and founding faculty director of the Institute for Food and Agricultural Literacy (IFAL), from the University of California, Davis. Pamela also serves as the Director of Grass Genetics at the Joint BioEnergy Institute in Emeryville, California. 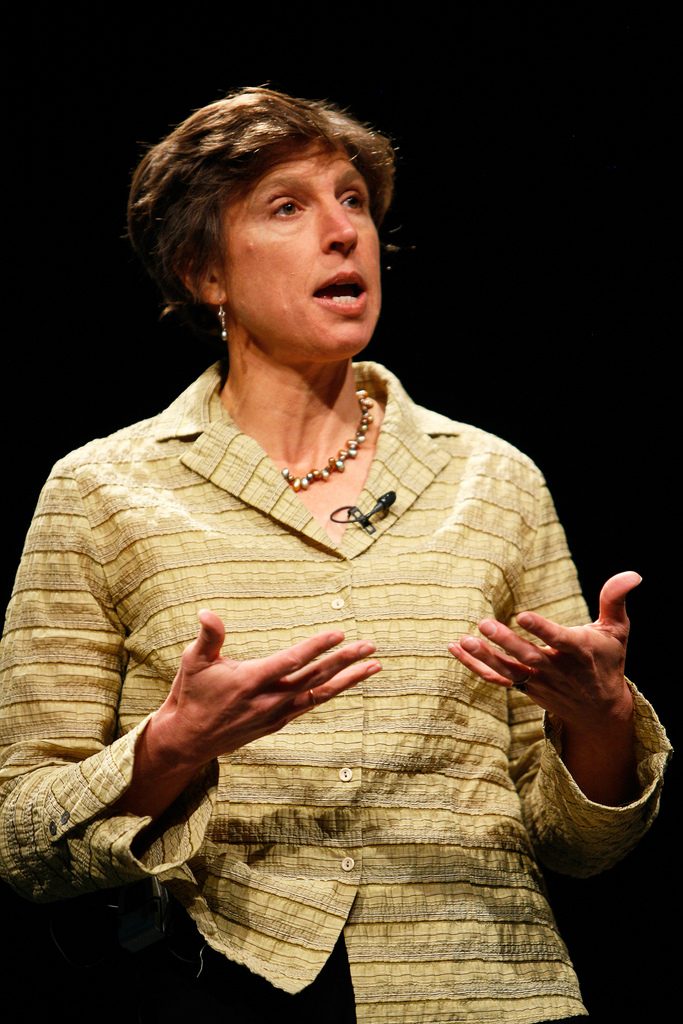 Pamela Ronald  speaking at PopTech in 2008

To say that Prof. Pamela Ronald is an accomplished scientist is an understatement. She is well-known for using genetics to improve global food security by studying the world’s staple crops , like rice,  and partnering with groups that reach the developing world.  Not only has she published over 160 scientific papers in well respected scientific journals , she has also authored over 45 review, perspective, and creative non-fiction works. Prof. Ronald has won many distinguished awards for her science and is an elected fellow of the American Association for the Advancement of Science. Her impact extends beyond the academic realm through articles in the popular press  (she has written opinion pieces for the Boston Globe, The Economist, The Boston Review and the New York Times) and application of her key research findings to vitally important, real-life agricultural problems. She recently gave a TED talk titled “The case for engineering our food”, which has been viewed over 1 million times and translated into 24 languages.

At TAGC, Prof. Ronald plans to present an overview of why genetics is so important for crop improvements—an issue this C. elegans geneticist admits, I did not fully appreciate until watching Prof. Ronald’s TED talk and discussing these issues with her. At TAGC, she will also share some of her lab’s most recent and exciting investigations. Finally, she plans to tell us about several real world applications of crop genetics enhancing the lives of millions of farmers worldwide.

How did Prof. Ronald get to where she is now? She told me that her initial inspiration stemmed from summer backpacking trips with her brothers  in the Sierra Nevada mountains when she was just 12 years old. She recalls the beautiful wildflowers from these trips, as well as one particularly poignant moment when they climbed up a saddle between the mountains, and came across a man & a woman using a book to identify the flowers. She says this was when she realized that a profession you loved could be possible – and she wanted that career. At Reed college she studied plant biology and became interested in how plants & microbes interact. Part of her attraction to this area of plant biology stems from several inspirational professors there.

As an undergraduate she became fascinated with how mycorrhizae associate with plants, and whether they have a symbiotic or defensive interaction. Chance almost always plays at least a minor role in every scientific career. For Prof. Ronald, the 1980 explosion of Mount St. Helen’s provided her with the opportunity to study mycorrhizal re-colonization of the ash field. Other formative training experiences included her time studying in Sweden/Switzerland, and working with her excellent mentors Sharon Long, Virginia Walbot, Brian Staskawicz, and Steve Tanksley. When she started her own lab, she wanted to work on rice because she thought it might provide an opportunity to both advance basic research and have a real world impact.

Prof. Ronald’s favorite moments in her job are when students comes to her with a new result that advances basic research. Thinking back on her career so far, she is most proud of her contribution to the Sub1 rice story. Fifty years ago, breeders identified rice strains that were tolerant to 2 weeks of complete submergence, a condition that kills most rice after just several days. With her collaborators, Prof. Ronald’s laboratory successfully carried out the positional cloning of the SUB1 locus, and demonstrated that a single gene conferred tolerance to submergence. Breeders at the International Rice Research Institute have now developed Sub1 rice varieties that were grown by more than 5 million farmers last year in Asia, Africa, and Latin America. Incredibly, this has allowed 3-5 fold increases in rice production for these poor farmers, whose crops are often devastated by floods.

What Prof. Ronald gets up to outside of the lab is not wholly surprising given her focus on plant genetics, but does sound wholly satisfying. Every day she swims, gardens, and cooks. Although her children are getting older, their family still tries to do river trips (her husband is an avid kayaker) and ski trips together. As a family, they do the kinds of things that she did when she was young. They now live even closer to the inspiring Sierra Nevada mountains, which first inspired her to work with plants, than she did when she was a child.

The topic turned to advice for the next generation of scientists. To succeed in science, Prof. Ronald suggested that young scientists should work on projects that excite them, in a field that will sustain their interest over time. She also stressed the importance of reading broadly and working on unexplored areas. Other useful advice was to try not to let disappointments discourage you too much because there are many in science. She also said that it’s essential to work somewhere you have the freedom to do the science you enjoy, in a place that you like to live.

Prof. Ronald said it’s an honor to speak at TAGC. She’s happy to talk with any student who’d like to meet her at the meeting.